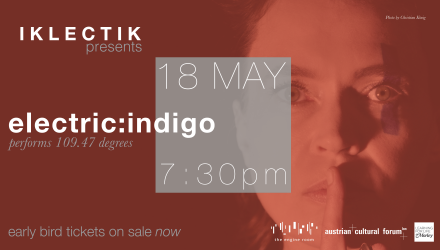 Austrian composer, DJ and producer, Susanne Kirchmayr aka Electric Indigo, returns to the UK, after a twenty years absence from the British music scene, for an exclusive concert at IKLECTIK on Thursday 18 May 2017.
The multiple award winning musician and founder of female:pressure – an online database of female artists working within electronic music – will perform a unique version of her six-channel sound art piece 109.47 degrees.
The title of the ultra-wide hyper-stereo piece refers to “the ideal tetrahedral angle in foams as described in Plateau’s laws”. From a set of small acoustic particles 109.47 degrees creates complex sonic structures that “live on friction, cohesion and constant movement”.

This concert forms part of the international sound art exhibition, The Engine Room, which
runs from 4 May – 1 June 2017 at the Morley Gallery in London. It has been funded by the
Morley Gallery and the Austrian Cultural Forum London. Support act to be confirmed.