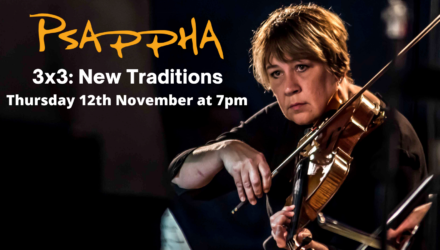 Luciano Berio’s Naturale reshapes folk music into a new tradition – a haunting, scintillating fusion of Sicilian balladry, sung by a Palermo street singer, with the classical avant-garde. There’s similar alchemy at work in Serynade, a tour de force for solo piano that explores the instrument’s sonic range while also tipping its cap to the piano’s place within concert-hall convention. The second of our three socially distanced concerts for three musicians opens with four of a kind, a quartet of shape-shifting duets for viola and piano by Betsy Jolas, and continues with a new solo piano work written just for us by young composer Clare Elton.

As with all other concerts in this 3×3 series, we’ll be livestreaming the 7pm performance via YouTube Live for free.