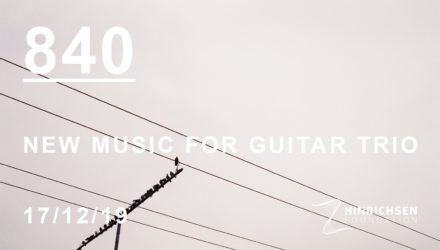 840‘s next concert features music for three guitars performed by the award-winning What Guitar Trio. Much of the programme will be made up of works composed especially for the concert, including an exciting new work from Rūta Vitkauskaitė called Fractions of Time, exploring harmonies from Messiaen in fresh and unexpected ways. There’ll also be new pieces from Michael Hughes, Christian Drew, Alex Nikiporenko and James Luff, which are by-turns, sparse, energetic, hypnotic, beautiful and enigmatic.

Also featured will be a captivating early piece of Bryn Harrison’s, dating from 1997, as well as “Stjärnskruvmejsel” by Anna Eriksson – composer, sound artist and guitarist living in Gothenburg. Contrasting and complementing everything else, there’ll also be a suite of six pieces by William Lawes, originally composed in the 17th-century for lyra viols, but sounding very much at home in an arrangement for three guitars.