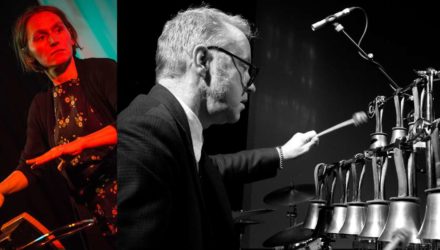 An evening of electrical mysticism, as thereminist and inventor Sarah Angliss brings you dreamlike music, featuring her phantasmagoria of music machines. Angliss and her machines perform live with Stephen Hiscock, extemporising percussionist from EnsembleBash, and guest vocalist Sarah Gabriel. Robotic carillons, telephonic counterpoint and more are in the mix. In Air Loom, Angliss also introduces a pneumatic instrument, made from parts salvaged from an abandoned Welsh chapel organ.

Hear this debut of Angliss’ brand new set, following on from her 2017 album ‘Ealing Feeder’:

“A highly atmospheric and compelling listen…drawing on a dense skien of real pasts and imagined futures to talk lucidly and provocatively about the present…the record feels like a whole universe until itself, brimming with fresh propositions and new directions…Ealing Feeder is a subtle gem.” – Robert Barry, The Wire, London

Kemper Norton will be performing a mixture of new and recent work inspired by the story of ‘Cruel Coppinger’, the semi-legendary Danish privateer and gang leader who terrorised the north Cornish coast in the late eighteenth century, as well as themes of family, transformation and physical vulnerability.