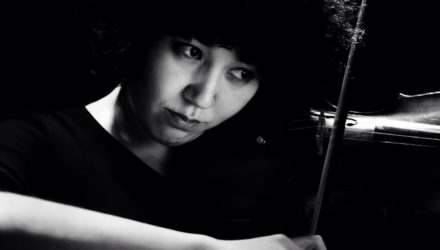 They’re both performers that devise reimagined approaches to their instruments. Kazakh violinist Aisha Orazbayeva is known for her fearless and confrontational approach to performance, whether breathing new life into classic repertoire, or premiering works by new composers. She has released three critically-acclaimed solo albums with music ranging from her own compositions to Telemann and Sciarrino, as on her 2011 debut Outside, released on nonclassical. Tonight, she’ll present a programme featuring pieces by Nicola Matteis, Biber and John Cage, in what is her first UK solo performance in over a year.

Kathryn Williams doesn’t make it easy for herself – her works often feature constraint and self-imposed obstacles as a key part of their composition, taking influences from contemporary classical, physical theatre, performance art and sport. She’ll be joined by performance artist and experimental musician Andy Ingamells, a composer who similarly takes influence from unusual, extra-musical sources. Together they present a new musical performance created collaboratively between Kentucky, Cork and Manchester in leisure centres, swimming pools, gyms, reed beds and bathtubs, before finishing with Larry Goves’ edible score happy bomf fat for voices and marshmallows.