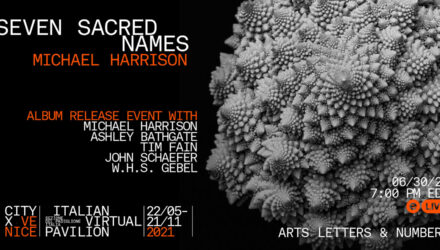 Join composer/pianist Michael Harrison in an exploration of his new album, Seven Sacred Names (Cantaloupe Music), through musical performances and interactive conversation. Seven Sacred Names is meant as a companion album to the book Nature’s Hidden Dimension by author, astrophysicist, and modern Sufi mystic W.H.S. Gebel. The Seven Sacred Names, according to the mystical cosmology of Sufism, tell the story of “…an awakening primal Self,” as Gebel writes in the album’s liner notes. Harrison says of this album, “I wanted to show how beautiful simple harmonies can be, especially in just intonation…and [to create a work] that would serve as an introduction inviting listeners and musicians to start perceiving just intonation as an infinite harmonic system encompassing limitless possibilities on a spectrum between simplicity and complexity.”

The event will be moderated by John Schaefer, host of WNYC’s New Sounds, with author W.H.S. Gebel and musicians Tim Fain (violin) and Ashley Bathgate (cello). Presented by Arts Letters & Numbers as part of the CITYX Venice Italian Virtual Pavilion of the 17th Venice Architecture Biennale.

Composer/pianist Michael Harrison (called “an American maverick” by Philip Glass) is one of only a few musicians with equal training and immersion in both Western classical and Indian classical music. His music forges a new approach to composition through tunings and structures that extend the ancient concept of just intonation, a form of pure tuning constructed from musical intervals of perfect mathematical proportions.