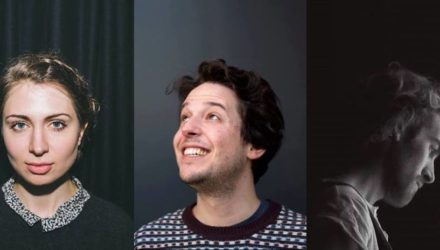 An assembly are a group dedicated to contemporary and experimental music, installation, and performance.

Throughout the first week of October, An assembly will embark on their debut tour of the UK to Manchester, London and Birmingham, presenting exciting new music, film and performance by three emerging composers and artists: Louis D’Heudieres, Rowland Hill, and Charlie Usher.

Throughout Louis D’Heudieres’ ‘Laughter Studies 6b’, four vocalists stand downstage from a small instrumental quintet, describing and imitating their own private soundtracks of synthesised tunes and field recordings, transmitted to them via earphones in a surreal and hysterical collision of subjectivities accompanied by angular melodies and midi-drum solos.

Award winning visual artist Rowland Hill continues this process of interpreting found material in a new film and performance commissioned by An assembly. Created as a response to Edwin Denby’s 1959 review of Stravinsky’s final ballet ‘Agon’, Hill uses Denby’s review and its relentless metaphors, references and precise visual shocks as a script for a new work, taking the linguistic articulation of a dance and returning it to a choreographed state through film, live performance and sound.

These three concerts will culminate in the world premiere of ‘An assembly’ by Brussels-based composer Charlie Usher, a 45-minute meditation on listening, hearing, and duration for large ensemble and audio. A constant wave of 14-second