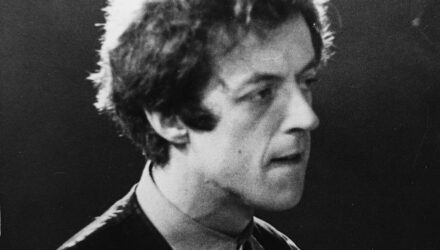 “Any direction modern music will take in England will come about only through Cardew, because of him, by way of him.” – Morton Feldman

“Cornelius lived in the future, often far beyond the hearing and sight ranges of most of us” – Alvin Curran

An upcoming performance by the Aonghus McEvoy Ensemble presents a rare opportunity for UK audiences to hear the music of this most revolutionary of composers, Cornelius Cardew (1936-1981).

Cardew’s music of the 1960s brought together ideas from both the European and American avant garde at the time, influencing everyone from Alvin Curran, Morton Feldman and Robert Wyatt to latter day luminaries like US musicians Jim O’Rourke and Sonic Youth.

This will include a ‘chamber & solos’ programme (Oct 9) and excerpts from his famed 193 page graphic score ‘Treatise’. (Oct 16)

Cardew himself, described Treatise as “a cross between a novel, a drawing and a piece of music”. The score offers no guidance as to the number of players or instrumentation. Sonic Youth would record a version for their ‘Goodbye 20th Century’ album, as would Jim O’Rourke on the label hat(now)ART.