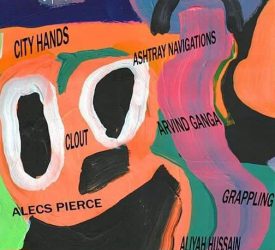 CITY HANDS
Manuel Padding, is a musician based in The Hague. City Hands incarnates his visions in improvised nervous noise trips and in dreamy incantations, all infused in seventies movies weirdness and classical science-fiction peaceful landscapes. Electronics, voice, tapes, other sounds, smoke and moving images accompany Padding’s psychedelic journey into the heart of the unknown. His narratives generally evoke a world where humans no longer prevail, a stream of words lurking into post-apocalyptic loneliness and colourful magic. Opening bridges between worlds for more than a decade, Manuel Padding throws rocks with pure elegance, and makes connections between people, continents and genres, never the easy way. https://vimeo.com/manuelpadding

ARVIND GANGA
Arvind Ganga is a guitar player from Den Haag, the Netherlands. He takes a physical approach to guitar playing, employing objects and extended techniques to explore new sonic possibilities. His music draws from influences as diverse as noise and drones, North Indian ragas, experimental rock, and everyday sounds. Using free improvisation he brings these together into an intense, loosely structured, chaotic mesh that is bathing in the rays of a deep red sun. Ethereal noise with a punk-improv attitude. Arvind plays solo, improvises with like-minded musicians, and is active in music/dance improvisation.
His music took him to play squats, galleries, clubs and festivals from Poland to Portugal, Turkey, Chile and Perú.http://www.arvindganga.net/

CLOUT, THEN GRAPPLING
This is the debut of a new duo composed of Kelly Jayne Jones and Greta Buitkutė. Intense flows of vocals and flute.

ALIYAH HUSSAIN
Visual arts based Aliyah Hussain loves exploring a range of mediums in her work. Through examining texture, fabric and photography, Hussain creates work that is often bold, exciting, colourful and funny. She frequently observes topics such as spirituality and space. http://www.aliyahhussain.co.uk/ALIYAH-HUSSAIN

ALECS PIERCE
Alecs Pierce is a British & European sonic and visual artist & composer engaged in a sort of collage of moments, and will be presenting an ASMR, wikitext and Youtube Incidental Music improvisation.
https://soundcloud.com/yemgel
https://www.youtube.com/watch?v=s-hBcyK2hZg