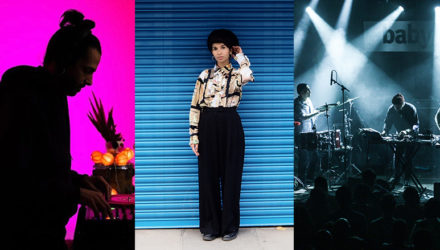 At the Cutting Edge: Islandman, Nabihah Iqbal and DJ Kobayashi

At the Cutting Edge: Experimental Sounds of Asia, is a series of concerts celebrating new music from across Asia and the diaspora, performed by natural collaborators and influenced by cross-arts forms.

The second concert in our At the Cutting Edge series will see the UK debut of Islandman, hailing from Istanbul. Launching their new album, the band’s record is full of ethno-cultural material from Japan to Bulgaria, including field recordings of throat singers from Tuva, Central Asia. Islandman will bring their unique mix of mellow electronic structures and dance beats with spacey live guitars, with a backing of shamanic rhythms to Cafe OTO. After seeing their incredible performance at Cappadox Festival in 2018, we expect to be in for a fantastic live performance which brings Turkish Psychedelia to the dance floor.

A true collaborator, Nabihah Iqbal will be performing an experimental, live set which brings together her vast range of influences including Turkish, Indian and Thai music. This year, she will not be performing many live sets as she records her new album, so this is a rare chance to see her in her element and hear some new material.

We will be graced by the sounds of DJ Kobayashi to kick off the evening as he mixes from his vast record collection spanning Middle Eastern grooves and Global Funk inspired music from archives around the world.