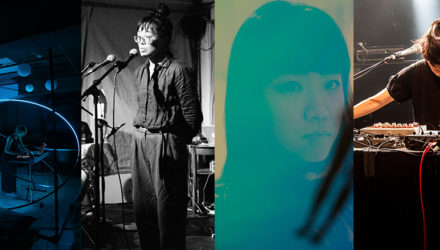 At the Cutting Edge: Experimental Sounds of Asia is a series of concerts celebrating new music from across Asia and the diaspora, performed by natural collaborators and influenced by cross-arts forms.

We are pleased to bring together three fantastic collaborators for an evening of electronic, ambient music from Japan, South Korea and London. Japanese underground legend Phew headlines the evening, performing a solo set which celebrates the music she has created over her lengthy career, from jazz to punk and everything in between.

Featured as a Showcasing Artist at SXSW 2016, this will be the first performance in the UK by Seoul-based electronic producer and composer haihm, who is also releasing a new album this Autumn. She will be presenting a new work with London-based Korean visual artist Bongsu Park, commissioned especially for At the Cutting Edge.

Cafe OTO regulars, O YAMA O, inspired by the folk music of Japan, will open the evening with a collaborative set exploring their unique combination of sounds from found object percussion to electronic loops.