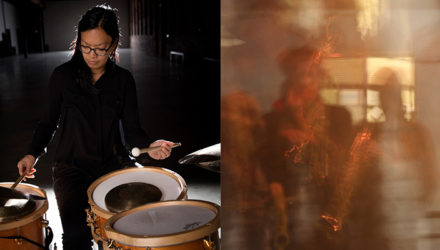 At the Cutting Edge is a series of concerts celebrating new music from across Asia and the diaspora, performed by natural collaborators and influenced by cross-arts forms.

The first concert will see a night of improvisation and exploration. The acclaimed, avant-garde Filipina-American composer, percussionist, and sound artist Susie Ibarra, will perform a set of pieces built around rhythmic cycles; a type of meditation which will weave through tempos, melodies, textures and phrases that move through various rhythms and polyrhythms. Susie has only performed in the UK once before so this will be a rare chance to see her incredible live set.

The Arizona-based band Sunn Trio will play an improvised jazz and desert-rock set, experimenting with the Afghan instrument, the Rubab, alongside a guest musician. Inspired by Indo-Arabian sounds and Middle Eastern guitar music, the band is headed up by guitarist Joel Robinson and takes many forms from solo to quartet to a sextet, depending on the space. The concert also coincides with the release of their latest album.

One man band extraordinaire ICHI, from Nagoya in Japan, will give a live performance using his own quirky homemade instruments. These often include (Stilt-bass, Kalilaphone, Balloon-pipes, Hatbox-pedal-drum, Tapumpet, Percussion-shoes and Hattrick-hat) with steel-drum, ping-pong balls, typewriter, toys and everyday objects. To see ICHI live is to witness something so playful and unusual you know that you’re experiencing something entirely new, it is fun it is danceable, it is exciting.