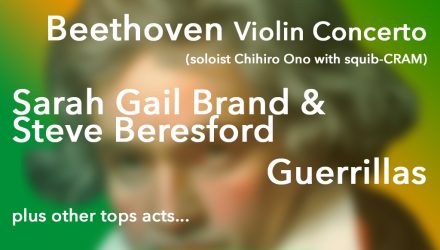 BAGGAGE is an evening of musical performances hosted by two of London’s more unhinged music collectives.

BEETHOVEN VIOLIN CONCERTO, OP.61
A full performance of the Beethoven Violin concerto performed by internationally acclaimed soloist Chihiro Ono, and a warped chamber orchestra put together especially for the evening.

PLUS
Short skits and performances from other squib and CRAM artists.

SQUIB-BOX is an artist collective and netlabel dedicated to the production and dissemination of radical and avant-garde music, regardless of its genre.
Founded in 2010 by Adam de la Cour, Neil Luck and Federico Reuben , squib-box has organised and performed at live events around the UK, with a variety of leading musicians, artists and performers from a range of disciplines.

CRAM is a music collective and independent record label, formed in 2011 by Benedict Taylor. It is focused on the promotion and development of improvised and new music. It is made up of musicians & artists at the forefront of the UK and European improvising & new music community.

Born in Japan, CHIHIRO ONO is a a London based violinist and violist. Her repertoire extends