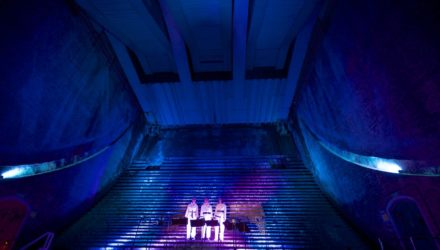 Together they’ll give the European premiere of Charles Mingus’s String Quartet No. 1 – never heard since its first performance in New York in 1972. Discovered by Apartment House director Anton Lukoszevieze, it features poetry by Frank O’Hara, and was never recorded. It survives only in manuscript form.

There’s recently unearthed music by the iconic American composer Julius Eastman, who died in 1990 aged only 49. A Grammy-nominated performer, Eastman’s bravura piano and vocal recitals at Carnegie Hall and Lincoln Center built his reputation. But much of his music disappeared with him, with surviving works often pieced together from archive recordings.

In the bridge’s huge Accumulator Chamber, there’s a work by Fluxus artist Ben Patterson for Voice and Solo String Instrument from 1961.

New music from composers Julius Aglinskas, Iain Chambers and Egidija Medekšaitė makes use of the atmospheric acoustic of the huge, brick-lined Bascule Chamber.

Art Historian Dan Cruickshank gives an exclusive talk about the architecture and surrounding history of Tower Bridge, and there are personalised guided tours of the bridge, culminating in the concerts inside the cavernous South Bascule Chamber.