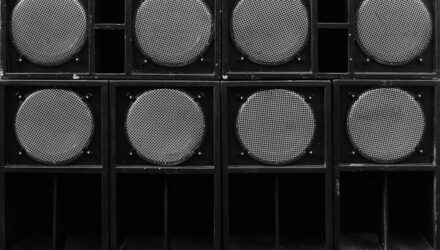 Bass Mids Tops presents an oral history of the UK’s soundsystem culture, featuring interviews with Dubmaster Dennis Bovell, Skream, Youth, Norman Jay MBE, Adrian Sherwood, Mala, and others and accompanied by photographic portraits by Brian David Stevens. The book charts the story of the bassline of Britain, in the words of those who lived and shaped it. The talk has made possible with the support of Strange Attractor Press, publisher of Bass, Mids, Tops.

This talk has been developed in conjunction with the RTM Production Group, a community of makers, broadcasting radio on RTM.FM and currently making their own sound system as part of the Three Rivers – a Creative People and Places programme.

The talk will be broadcast live on RTM.FM – one of many planned broadcast events as part of the Original Selector programme of broadcasts on RTM.FM throughout w/c 22nd Feb. Original Selector is a celebration of sound system cultures and their musical legacy broadcast all week on RTM.FM, including immediately before and after this talk.

Copies of Bass Mids Tops are available to purchase online from the TACO! bookshop

Joe Muggs is best known as a music writer, having worked since 2000 for the likes of Mixmag, The Wire, FACT, The Guardian, Daily Telegraph, theartsdesk, Bandcamp and Boiler Room – and published Bass, Mids, Tops: An Oral History of Soundsystem Culture (with photographer Brian David Stevens) at the end of 2019. He also brings to the table experience as a DJ, electronic musician, educator, album compiler (Ninja Tune’s ‘Grime 2.0’, Ministry’s ‘Adventures in Dubstep & Beyond’), A&R, label manager and ambient cabaret promoter, and continues to pursue all kinds of hare-brained schemes in public and in secret.

Perhaps best-known internationally as the Planet Mu Records-signed producer and DJ, London’s Mr. Mitch, aka Miles Mitchell, defines his music by his own personality rather than deferring to a scene consensus. A minimalist at heart, Mitchell specializes in detailed sound and melody in space, but remains ambitious in his scope, launching out from roots in instrumental grime. As the founder of fast-rising record label Gobstopper Records and co-founder of the club night Boxed, Mr. Mitch is also a curator and auteur at the forefront of one of the most forward-thinking sounds in club culture, also encompassing ambient and experimental electronic music. Between his own music and the music he champions, he is a reliable incubator of a music scene dedicated to re-thinking and expanding what UK club music means.