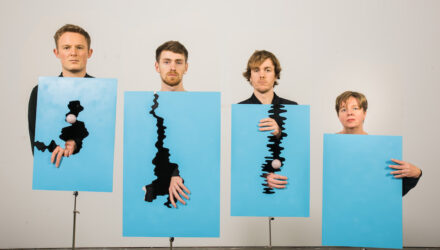 Searing strings, mind-bending noises and absurd theatricals come together – we’re bringing together some of our favourite experimental artists at IKLECTIK this autumn. Kicking off the evening, performer-composer James McIlwrath returns from his victory at Battle of the Bands in early 2020. He’ll be performing his original work This piece isn’t about teeth; an eclectic and confrontational piece which precariously balances grotesque visuals, humour and discomfort. Later in the evening, violinist and experimental sound artist Chihiro Ono will be performing a set of music for solo violin, intertwining early music with her own compositions and improvisations. Experimental and theatrically absurd, Bastard Assignments are a composer-performer collective renowned for their high-energy and genre-bending performances. Following James’ set, they’ll perform Edward Henderson’s WIll – a meditative instrumental work moving seamlessly between composed and improvised music. In stark contrast, the quartet will close the night with Josh Spear’s FEED, a theatrical work combining visuals, movement and lip-syncing, resulting in what the ensemble describes as a ‘high-octane werewolf piece’.