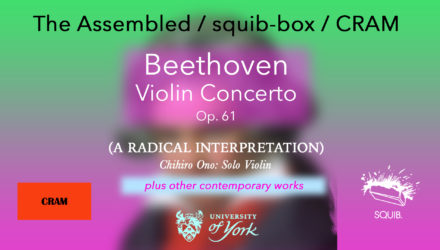 A radical take on Beethoven’s virtuosic violin concerto.
Plus, other contemporary works performed by University of York students.

Guest performers from experimental music collectives squib-box and CRAM join forces with the University of York’s own experimental ensemble The Assembled for this radical and unique interpretation of one of Beethoven’s masterworks.

Led by violin soloist Chihiro Ono, squib CRAM and The Assembled sculpt their own version of the orchestral score, attempting to reclaim some of the controversy, alarm and astonishment that accompanied the work’s original performances.

Fresh from it’s premiere in London, and subsequent broadcast on BBC Radio 3, this will be like nothing you’ve heard before.

“The thing on radio three RIGHT NOW sounds like the St Trinians orchestra has been given a symphony! Stunning work!!!… Difficult to describe how fabulously innovative the piece is.”

This concert will also feature other contemporary works performed by The Assembled.