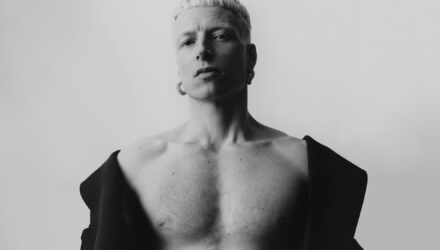 Bendik Giske (NO) is an artist and saxophonist whose expressive use of physicality, vulnerability and endurance have already won him much critical acclaim.

You can hear all of this in his debut album Surrender, released at the start of 2019 on Smalltown Supersound, which can be described as Bendik Giske stripped to the core: no overdubs, looping, or effects. Just his body, breath, the saxophone and a resonant physical space, plus lots of microphones.

The body is important for Bendik Giske, even more so than as an acoustic musician. Not just in the strength and muscle control required to accomplish circular breathing on the saxophone, the unusual technique he employs to mesmerizing effect. It’s also reflected in the tradition of dance he practiced as a child in Bali – where he split his time between Oslo with his artist parents – and enjoyed as part of an electronic music epiphany in his adopted hometown of Berlin. And body is implied in his sense of queerness, which has helped him create his own sound, blossoming luxuriantly not only on record but also in his striking, embodied performances.

As such, in the past Giske has likened his performance to transmuting electronic music through all of his human faults, akin to becoming a machine. And with second album Cracks he introduces a new set of parameters for the automated processes of his muscle memory to work against. His decision to collaborate with producer André Bratten and his extensive studio of electronic machines saw Giske play in the new ‘resonant’ space of Bratten’s reactive studio tuned to his original sounds.