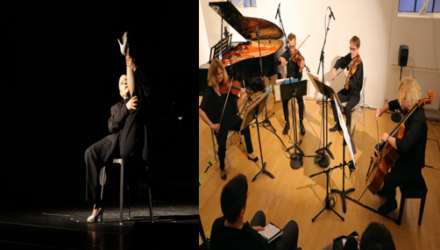 The Ear Festival presents, a return to The Cello Factory for a group that was one of the highlights of London Ear 2018: The Neo Quartet of Gdansk, Poland. They are joined by the sensational composer/performer Alwynne Pritchard who has also appeared in past editions of London Ear Festival. Together they will give a performance of Alwynne Pritchard’s remarkable experimental work Nostalgia, following its acclaimed performance at the NeoArte Festival in Gdansk.

Alwynne Pritchard:
Nostalgia (string quartet and voice/performance)
Nocturnal (string quartet)
also including: Group improvisations, solo vocal/physical performances and readings from up without an insistent casting away

Tickets available at the door.
£10 (Concessions £7)
To reserve a ticket email: mail@londonearfestival.co.uk

During the concert there will be an exhibition in The Cello Factory of works by The London Group of artists.