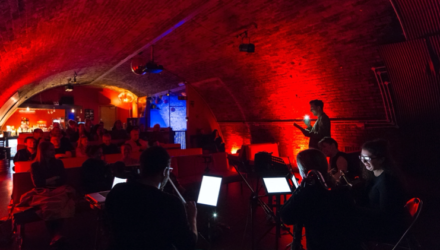 Between the (y)Ears – Ret Frem

In the 1970s, composers writing at IRCAM in Paris pioneered a new technique of composition: ‘Spectralism’ took the computer analysis of acoustic sounds as its starting point and produced some of the most imaginative and inspiring music of the late 20th Century. Forty years on and the international influence of trailblazing composers Gérard Grisey and Tristan Murail is still very much evident.

WATERLOO: WE NEED EU! features the exciting UK premiere of a duet for Flute and Cello by Murail (“Une lettre du Vincent”), and includes Grisey’s remarkable ANOUBIS-NOUT, an unusual solo for Contrabass Clarinet. Alongside these works, we programme pieces by international composers inspired by French spectralism, including Kaija Saariaho and Isabel Mundry. We have commissioned new work by young composers Frej Wedlund and Will Handysides and present the premiere performances this November.