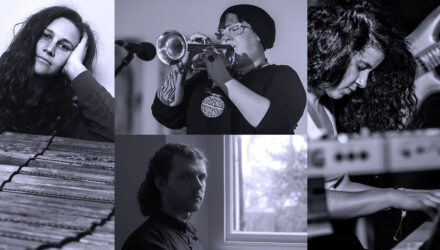 Returning artist to the series Bex Burch (Vula Viel) is a composer, producer and improviser. Bex believes in the transformative power of power of sound and aims to create music which resonates. She builds her own instrument (augmented gyil), and makes music drawing from a wide range of influences including classical, minimalist and Dagaare Ghanaian. Bex is joined for the first time by musician Kim Macari, who is an Artist-Activist immersed in the world of improvised music. Kim believes in the arts as a powerful tool of empowerment, creative expression and social change. As an artist, she performs in a number of improvised settings on trumpet and spoken word and creates graphic scores, often using ekphrasis and data sonification.