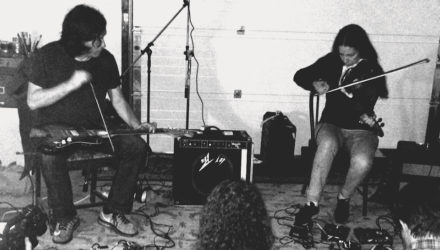 Bill Nace is an artist and musician based in Philadelphia. He has collaborated with an extraordinary range of musicians, including Michael Morley, Mats Gustafsson, Joe McPhee, Chris Corsano, Steve Baczkowski, Jooklo Duo, Chris Cooper, John Truscinski, Thurston Moore, Greg Kelley, Jake Meginsky, Jessica Rylan, Paul Flaherty, Wally Shoup, and Kim Gordon, with whom he regularly plays as one half of the duo Body/Head. They recently The Switch on Matador. He has been a featured musician in festivals such as ATP (curated by Jim Jarmusch and held in Monticello, NY), Colour Out of Space(Brighton, UK), Supersonic Festival (Birmingham, UK), International Festival Musique Actuelle (Victoriaville, QC), and Homegrown (Boston, MA). He has performed in a wide variety of venues, running the gamut from the Musee d’Art Contemporain (Strasbourg, France) to The Stone (NYC) to Bennington College (Vermont). Nace’s range has been described as ” veering from sculptural, almost Remko-Scha-esque chime to Loren Connors-style elegance in only a few short moves.” (Mimaroglu Music, 2010). Recordings can be found on Ecstatic Peace (Northampton, MA), Ultra Eczema (Belgium), Holidays (Italy), 8mm (Italy), Throne Heap (VA), HP Cycle (Toronto, ON), as well as on Nace’s own label Open Mouth.

Samara Lubelski, based in New York City, and often in S. Germany, is best known as a solo artist with nine full-length releases, but she has also been involved in various art-music provocations – MORE ON OUR WEBSITE.