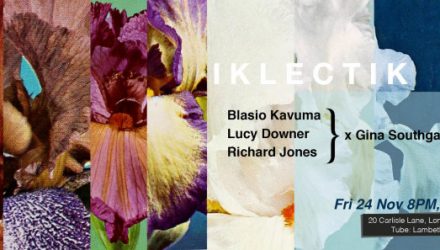 A night of inventive new music from composer Blasio Kavuma and a live visual response and artist Gina Southgate, with Richard Jones on viola, Lucy Downer on clarinet/bass clarinet and Blasio Kavuma on flute/piccolo. Supported by the RVW Trust.

“The aim of the project is to explore the creative potential of music that is composed specifically for a visual artist to respond to. The piece will consist of three tableaux, lasting approximately 15min each. Gina Southgate will work on three separate canvases, one for each tableau.

The collaborative aspect will be embedded in the compositional process itself; each tableau will explore rhythms and textures that facilitate the physicality of artistic production, interacting with the movements and sounds that the artist produces in performance. It will endeavour to evoke associations and colours pertinent to the artist’s musical heritage, allowing the artist to create instinctively and uninhibited. The project will be an opportunity to assess the ways in which certain textures, rhythms and rhetorical devices can impact the artist’s response when they are crafted in a way that maximises the expressive potential of the response itself.” – Blasio Kavuma