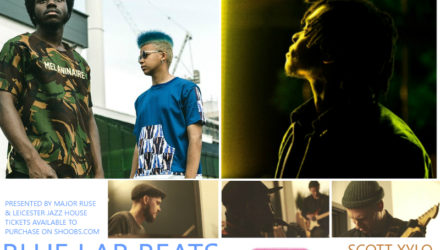 In association with Leicester Jazz House, Major Ruse have developed one of the most exciting contemporary jazz events to hit the East Midlands. London’s own Blue Lab Beats have been making waves on the jazz scene, from Boiler room and Jazz FM sessions to festivals and tours across Europe. Playing shows with world-renowed musicians such as Roy Ayers and Thundercat, Blue Lab’s unique multi-instrumental and live-sampling approach is as impressive as it is unique.

Leicester born artist Scott Xylo joins the lineup, with influences ranging from rock giants, Hendrix and Pink Floyd, to directors such as Quentin Tarantino and David Lynch. His eclectic tastes in music, film and art come together to create a genre of music rooted in a rich cultural heritage, whilst simultaneously reaching far into the future. Describing himself as a “Afro Trippy Hippy” Scott Xylo is an artist that doesn’t like to fit in a particular box, but builds new boxes with every genre he finds.

Major Ruse are an East Midlands trio that entirely rework themes from traditional jazz, exploring them through a lens of hiphop, D&B and a variety of other genres with which they have been brought up around. Their live shows explore the relationship between complex harmonic progressions and intricate rhythms, whilst maintaining a definite focus on groove. With vibrant performances, refreshingly modern songwriting and a visible passion for their instruments, Major Ruse are not to be missed.