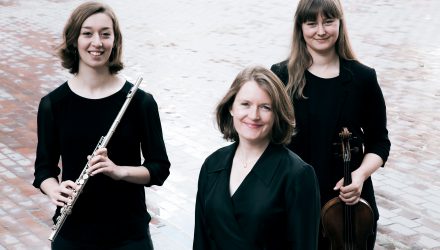 Tuesday 13 March 2018
The Durufle Trio (viola, flute and piano) are joined by soprano Janet Oates to perform four world premieres by British composers, all written especially for the trio. Rob Keeley’s ‘Trio in One Movement’ casts an atmospheric beginning, whilst Tom Armstrong’s ‘Consort Music’ delves into the realms of the aleatoric. Janet Oates’ ‘Singings and Sayings’ is a collection of six short proverbs or contemplative sayings from around the world. Works by Colin Riley and Rhiannon Randle will also be premiered.