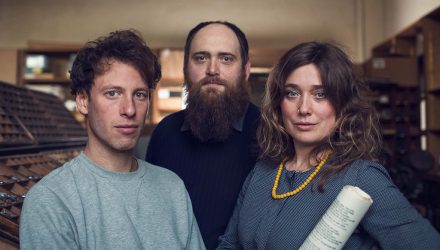 A broadside, also known as a broadsheet, was a single sheet of inexpensive paper printed on one side with a ballad, rhyme or news story, accompanied by woodcut illustrations. These ballads from the sixteenth to twentieth centuries were once displayed and sung daily on the streets of Britain and played an important role in the country’s musical and political past. Working from surviving of copies of broadsides in the Bodleian Library’s collection, renowned multi-instrumentalists Sam Lee, Lisa Knapp and Nathaniel Mann front a five piece band to bring to life these traditional ballads for a new generation. The trio are joined by guest musicians Seth Bennett and Pete Flood