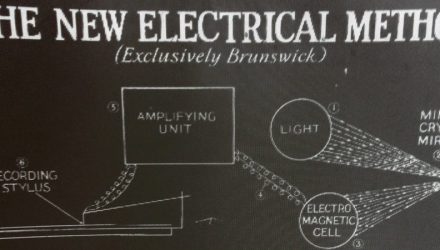 An evening of durational and immersive sound, performance and installation in action revealing an insight into the creative processes of BEEF members Melanie Clifford, Matt Davies, Sam Francis, Howard Jacques, Eliza Lomas, Shirley Pegna and others.

The Brunswick Light-Ray Process was an early method of sound recording technology using a mirror, light rays and sound wave vibrations to record audio in a way that harmonizes with the optical soundtrack employed in photo-chemical film processes. Over the preceding months, BEEF have been developing versions of the defunct Light Ray Process to test it’s limits and potential.

The intricacies and fascinating histories of former working mens Brunswick Club in Bristol will be explored, discovered and revealed via the Brunswick Light Ray Process itself alongside long-lost and newly invented methods and related audio excursions and explorations throughout the building.

A 60 minute version of BEEF’s Brunswick Light-Ray Process excursions has been selected to feature on Radiophrenia which will be broadcasting across Glasgow on 87.9FM 24 hours a day 6-19 November 2017.