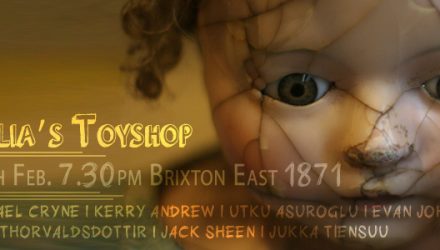 The Riot Ensemble celebrates the beginning of 2017 with a return to Brixton East 1871 in an evening filled with chamber music from around the world. Come hear some of Europe’s top performers in an array of World and UK Premieres, along with the customary £5 bottles of wine!
The concert includes Hayirli Olsun for Trombone, Harpischord, Percussion and Piano by Utku Asuroglu (UK Premiere); Shades of Silence for String Trio and Harpsichord by Anna Thorvaldsdottir (UK Premiere), Hammock by Kerry Andrew, Celia’s Toyshop by Michael Cryne (World Premiere), Wolke über Bäumen for solo violin with gut strings and baroque bow by Evan Johnson (UK Premiere), and our second performance of Television Continuity Poses, which we co-commissioned with BBC Radio 3 from Jack Sheen.