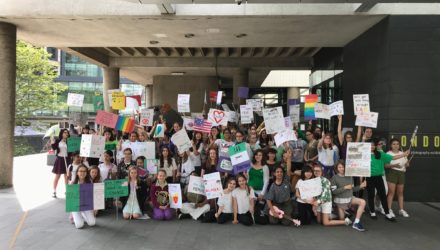 Iain Chambers’ new vocal work ‘City of Women’ celebrates the advance of women in and around the City of London, in their own words. The 20 minute piece – for soloists and a choir from City of London School for Girls – will be performed multiple times inside Leadenhall Market over the Open House weekend.

It explores women’s freedom of thought (and religion), their right to work, to be independent financially and socially, and to vote and take part in public life. The perfect theatre of Leadenhall Market was chosen because, until the 1840s, women porters did heavy lifting there — carrying a whole sheep carcass, or a side of beef.

The music is set to the words of women of character who made great breakthroughs. Some are well-known, like suffragist Emmeline Pankhurst defending herself at the Old Bailey, or reformer Elizabeth Fry experimenting with micro-loans. Some you might not have met, like the risk-taking financier Hester Pinney or the cross-dressing pickpocket Mary Frith, aka Moll Cutpurse.

The words draw on fresh historical research by Veronica Horwell, Iain’s collaborator on the acclaimed 2017 project The House of Sound, which recreated the sound of the square mile from 1400-2000 with period musicians and radiophonic sound design.