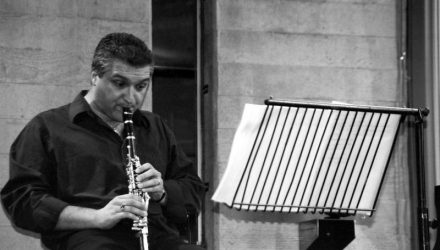 Clarinettist and composer Luca Luciano returns to Brighton as part of the Fringe Festival, presenting music from his latest release as part of hi “Poeta Tour 2017”.
The event will feature music informed by his research on extended techniques and new music for solo clarinet that he has regularly presented in the UK and overseas at prestigious venues such as St Martin in the Fields in London, Cambridge University and the American Cathedral in Paris. Along with original material from Luciano’s latest release “Poeta”, the performance will also feature John Cage’s Sonata and music by George Gershwin. During the performance the clarinet is pushed to the edge using a wide range of styles and expressions on music either notated or “composed in real time”. Luciano tries in this remarkable journey to embrace all styles of music he loves in an imaginative tour around the world from Western European music to Afro-American or folkloric music of Southern Italy, from contemporary classical music with chromatic and angular-shaped lines to heartfelt melodies. “…this was a most successful programme, much enjoyed by the capacity audience” (Musical Opinion, UK’s oldest classical music magazine)