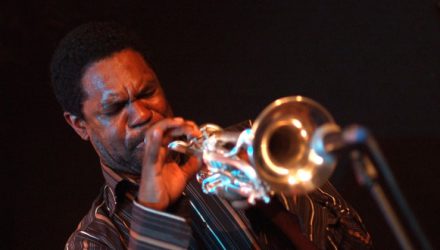 This season, Club Inégales is celebrating its fifth anniversary so it feels only natural to invite two of our most regular collaborators to take to the stage. Byron Wallen and Hyelim Kim have both featured at the club before – Byron as a visiting soloist and Hyelim as a core member of Notes Inégales – and their incredible talents on the trumpet and taegŭm respectively will no doubt be familiar to some of you.

Byron’s inimitable playing takes influences from African and Eastern cultures whilst still retaining a true jazz spirit and his work as a composer has singled him out as ‘the most interesting new explorer of Miles Davis’ legacy’. Hyelim’s performances bridge cross-cultural divides as they open up new dialogues between Korean music and other traditions. Come and hear both performers bring their unique work to the club alongside Notes Inégales!