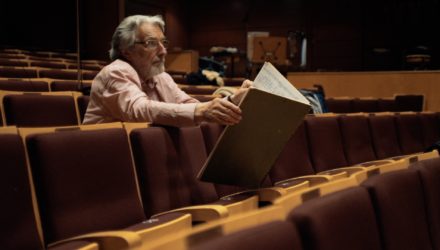 The Octandre Ensemble’s ‘Way Out East’ Composer Portrait concert series continues, focussing on the music of Frank Denyer, whose ‘extensive study of non-Western music… shows in the semi-theatrical, almost ritualistic atmosphere his music creates’ (The Strad). The concert features a wide range of non-conventional instruments, combined in works of intricate beauty and intriguing fascination, both visual and musical. The intensity of the bass-flute quartet ‘Quick, Quick, the Tamberan is coming’ finds its equal in the fragility and delicacy (unexpected given the instrumentation) of ‘Two Voices with Axe’. An extended music theatre work, ‘Screens’, receives its first full performance, featuring soprano Juliet Fraser. The piece requires visually arresting dressing screens to conceal performers, including one playing, the santoor, an indo-persian hammered string instrument. Meanwhile in ‘After the Rain’ solo violin and Japanese shakuhachi are accompanied by a trio of ocarinas in work of verdant jubilation, inspired by Denyer’s experience of the breathtaking regeneration of the Kenyan landscape after an extended drought.

Frank Denyer will give interviews to explain the fascinating stories and ideas behind his music in what promises to be an evening of true discovery. Well worth taking the chance the chance to hear this unique musical voice!