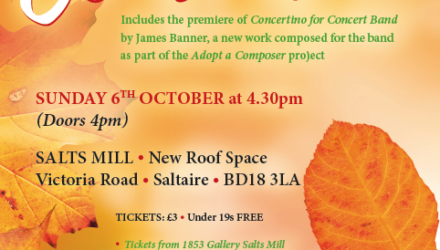 A new work for concert band by James Banner, created in collaboration with the Two Rivers Concert Band as part of the Adopt A Composer Scheme 2018/2019.

The work draws inspiration from Ilkley’s rural heritage and the surrounding industrial history of Bradford and Leeds.

James Banner was born in Dudley, England and is now based in Leeds and Berlin, working around Europe as a musician, composer and educator. His music has been described as “unobvious and unpredictable” as well as “intense and dramatic… gentle and beautiful… full of drama”, and has been supported by Initiative Musik, UdK/Hanns Eisler and the Berlin State.

The Two Rivers Concert Band is a community concert band based in Ilkley, West Yorkshire and is led by Mike O’Farrell.

They play regular concerts at Knaresborough Castle, Harrogate Valley Gardens and the newly renovated Otley Parish Church, holding regular open rehearsals at our regular home of Ilkley Baptist Church. They can be seen in Ilkley town centre from time to time at the Bandstand, and about the town over the Christmas period. We play a wide range of music: baroque, classical, pop, film and musical numbers plus more contemporary wind band music.

The Adopt a Composer project matches leisure-time choirs, bands, orchestras and ensembles with a composer for a year, leading to a first performance, a recording and a possible broadcast on BBC Radio 3.

The project is funded by the PRS Foundation, Philip and Dorothy Green Trust and Creative Scotland, and run by Making Music in association with Sound and Music.