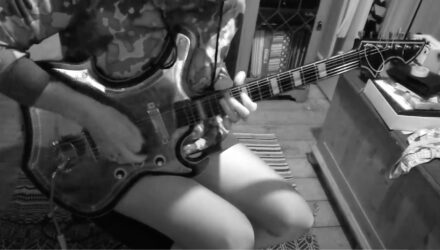 Corpora Aliena is pleased to present a concert based on the theme of ‘Guitar Stories’ – and will explore the use of the guitar within contemporary experimental music. The concert features leading international and pioneering composers – sound artists – and musicians – and include; Urban Eden (Lis Helman and Dominic Hemy) – the duo of James Malone and Phil McGuire – Bernhard Living – and Lisa McKendrick (aka Nnja Riot).

Bernhard Living’s Composition 2020.07 (Guitar Stories) is a densely textured work – and uses guitar-based sounds that have been produced with physical modelling and granular synthesis. Elements include continually repeating patterns and power chords. The composition was inspired by memories of living in Los Angeles in the early seventies – and of the L.A. rock scene.

Urban Eden will give the first performance of their Saved By The Sea, a guitar and drone-based soundscape with moving image accompaniment.

For the concert James L Malone and Phil Maguire will be conducting a real time exploration of the intersection between guitar and electronics through the medium of freely improvised musical performance.

Lisa McKendrick (aka Nnja Riot) will create a performance using a combination of regular and hand-made guitar pedals using a fractured guitar with a loaded history. Her music speaks of ritual, the psyche and is sometimes a self-parody or parody of guitar heroes. For her project, Nnja Riot attempts to deconstruct, tell a new angle and combine experimental performance with traditional guitar riffs. Lisa McKendrick has played guitar since a child and has three self-released albums as another project, Listen Lisse, which is guitar-based songwriting.