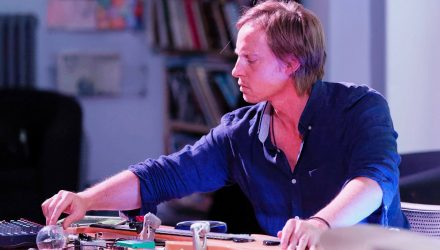 Corpora Aliena is pleased to present a concert of diverse experimental music performances based on the theme of ‘Eclectic Electronics’, and will include music performed on a bucket, a violin, and a guitar.

Included in the programme are; the American sound artist Bill Thompson, who will be giving a live improvised performance using a Moog electronic guitar with built in electronics pus miscellaneous table top devices and found objects; the London-based musician Electric Elizabeth, who will be investigating the sounds hiding in a metal bucket via contact microphones, elastic bands, various collected objects and the cheapest space echo delay that could be found; the London-based French musician Lola de la Mata will be performing with a mix of voice, violin, electronics: plus a screening of films by the Danish multimedia artist Stine Deja, whose recent collaborative exhibition with Marie Munk, ‘Synthetic Seduction’ was shown at the Annka Kultys Gallery, London.

The concert is an exciting opportunity to see and hear some of the leading musicians and artists who are a part of London’s experimental music and contemporary arts scene.