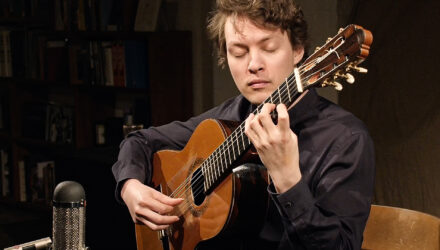 Born in Havana in 1939, into a family of musicians, Leo Brouwer was nineteen when the Cuban Revolution succeeded, and as a young man he strove for some similar breakthrough in music. He studied the works of Luigi Nono and Iannis Xenakis; he also met Hans Werner Henze, when the latter visited Cuba in 1969. Soon, though, the double call of his instrument – the guitar – and of his native culture drew him in other directions.

The first part of this programme opens with a work for solo guitar, La Ciudad de las Columnas (The City of Columns), which Brouwer wrote in 2004, taking his title from an essay by the Cuban writer Alejo Carpentier that was originally published with photographs of Old Havana by Paolo Gasparini. Rather like Musorgsky in Pictures at an Exhibition, Brouwer begins with an ambling introduction that will be briefly recalled as one scene succeeds another. For his first movement proper, “Andar la Habana” (Walking Havana), he takes over a piece he had written almost half a century before, when he was seventeen: “Pieza sin titulo No. 1″. Then comes “La Ceiba y el Colibri”, on the image of a ceiba tree and a hummingbird. The first slow movement visits the Monastery of St Francis of Assisi, founded in the sixteenth century, from which a short walk leads to the busy Calle del Obispo, lined with shops. On the other side of the harbour, guarding the entrance, is the castle of El Morro, site at sunrise (amanecer) of the second slow movement. Going back to the Calle del Obispo, to its harbour end, the tour finishes at the Plaza de Armas in a toque, or dance festival.

After this we pull away from local colour, perhaps to take in more a satellite’s view of a green and brown island in a cobalt sea. Dialógos de la Isla y el Mar, composed in 2018, is certainly music of contrast – between two instruments, guitar and cello, that are nevertheless being brought together in multifarious ways, and between aspects of passion and dance. In the first movement the cello has to be taught to dance as the guitar learns to breathe deeply. After a magical passage suggestive of calm sunlit waves, the guitar sets out a path for the cello to follow, and dance waits at the end of it. There is then a reprise. Stentorian unisons begin the “Manuscript of the Island and the Sea”, which features song and exquisite mixed timbres. There is a brief cadenza for each instrument, and then the guitar invites the cello to sing again. The finale, “Immense Sea of Water and Fire”, is all dance.

Then, from Drogheda in Ireland, guitarist Alec O’Leary and his guitar quartet will present the world premiere of Brouwer’s ‘Irish Landscape with Rain’, a piece initially written for last year’s cancelled festival. Commissioned by the Louth Contemporary Music Society, Irish Landscape with Rain, scored for four guitars, is a greeting from one island to another having a rather different climate. The dance now is a jig, and it persists despite the downpour of ostinatos and the harmonic thunderclouds. The guitar quartet will then perform Brouwer’s classic ‘Cuban Landscape with Rain’ ,before Alec O’Leary will enchant viewers with two solo works: ‘Cuban Landscape with Bells’ and the world premiere of ‘Dorian, it is too late’ , a new piece in memoriam of Oscar Wilde. (Paul Griffiths, 2021).