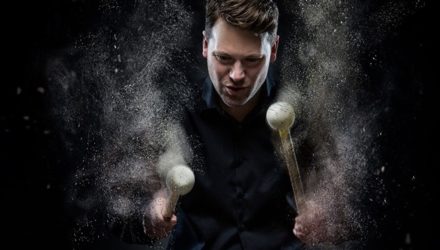 Sound artist, entertainer, and professor Janek Schaefer trained as an architect at the Royal College of Art, where he fell in love with exploring the relationship between sound, space and place. He has exhibited and performed in over 30 countries worldwide, from The Tate Modern to The Sydney Opera House, and has released 34 albums, including collaborations with Charlemagne Palestine, Philip Jeck, Robert Hampson, and Stephan Mathieu.

Watching violinist Anna Phoebe and pianist Aisling Brouwer of AVA interact on stage is always a mesmerising experience – and it will be enhanced by the Chapel’s acoustics. Rooted in cinematic narratives, AVA’s music unfolds around the relationship between violin and piano, evoking emotional journeys that never conform to expectations and yet are instantly accessible. The duo has recently released their debut album, Waves, on One Little Indian Records.

One of Britain’s most diverse percussionists, Joby Burgess can often be heard on major film and TV scores, notably leading the percussion on Black Panther, The Darkest Hour, Paddington 2, Trolls, The Last Kingdom and Taboo. He was featured on the score to Alex Garland’s Ex Machina. His recent highlights include extensive tours with Peter Gabriel’s New Blood Orchestra, PUNKIT (an adventurous participatory project for massed percussion ensemble by Stephen Deazley), and ‘Pioneers of Percussion’, a solo recital programme featuring new work by Nicol Lizée, Linda Buckley and Rebecca Dale.