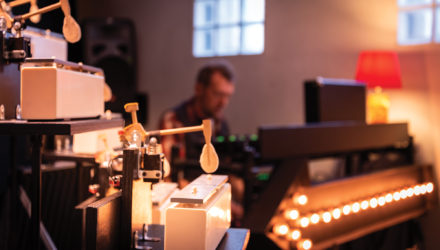 Stubbleman is the alter-ego of maverick composer and producer Pascal Gabriel. From his beginnings in a Belgian punk band to helping spearheaded the ascent of a new wave of electronic music in the UK, Pascal has composed, produced and mixed with a huge variety of artists including Goldfrapp, Dido, Natalie Imbruglia, Bebel Gilberto, and Kylie Minogue. His own music embraces his electronic ambient past combining a cinematic mixture of found sounds, field recordings, and modular synthesisers, often accompanied by live piano. Stubbleman’s panoramic debut album, Mountains and Plains, is a true sonic road trip across the USA, an album that evokes the delights of endless train tracks, sleepless cities, nostalgic ruins, big skies, high deserts, and lost junctions. Stubbleman with be debuting a new work showcasing the chapel Henry Willis organ in collaboration with the chapel’s organ scholar and composer Jay Richardson.
Comprised of an ever-evolving line-up of sound artists and musical inventors from the Hackoustic community, the Hackoustic Orchestra finds ways to incorporate entirely new musical instrument creations into unique multidisciplinary improvised performances. Among their projects, the brilliant curation at Late at Tate, V&A and Abbey Road Studios alongside their home base Iklectik – with interactive installations, sonic experiments, and performances inspired by the work of artists such as Nam Jun Paik.
Henrik Lindstrand is a Swedish piano player and film score composer, also known for being the keyboard player of the legendary Danish rock band Kashmir. During his tenur