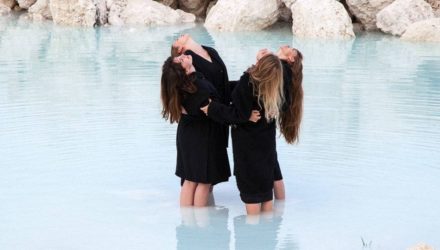 Daylight Music: We like We, Otto A Totland, Rauelsson and F.S.Blumm

We like We perform a version of Time is Local a work co-created by the ensemble and artist Jacob Kirkegaard. Originally this was a 12-hour multichannel performance, based on a live installation in 12 different chambers of a museum. This afternoon the duo of Katrine Grarup Elbo (violin) and Katinka Fogh Vindelev (voice) will bring a version of this new project to the chapel, continuing their mission to express sound beyond the grid of genres.

Minimalistic, melodic, visual, and calming, Otto A. Totland’s music reflects both his early interest in computers, sequencers and synths and his subsequent departure from them to focus on piano composition. He has released two solo piano albums, “Pinô” and “the Lost”, on German based record label Sonic Pieces. Otto is also a member of the duo Deaf Center with Erik K Skodvin.

Known for his constant musical evolution, Rauelsson’s musical journey has transitioned from lo-fi, intimate compositions of delicate folk to a more contemplative, experimental, and dense sound. His latest release, Mirall, is an eclectic collection of compositions that celebrate electronic exploration while maintaining a focus on classical instrumentation. In addition to his main discography, Rauelsson has also released music for film, documentary and photographic projects.

Frank Schültge is a German author, musician, and producer, working under the pseudonym F. S. Blumm. . Based in Berlin, Frank absorbs everything and takes it with him, weaving it into his instrumental portraits, ” …the man makes some damn charming music” (Pitchfork).