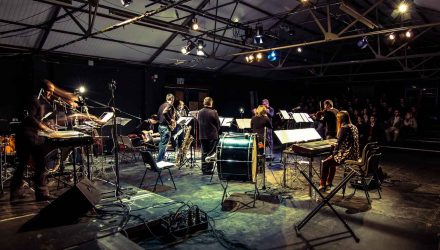 In this special portrait concert, the new music ensemble Decibel presents a high energy programme, displaying the full breadth of Ed Bennett’s music, from wild and driving polyrhythmic workouts to delicate moments of stillness and quiet introspection. At the centre of the programme is a substantial recent work Togetherness which explores the possibility that working together whilst retaining our own unique and individual identities is the key to a brighter future. The concert will coincide with the release of Decibel’s new album on the Diatribe label.

Formed by Irish composer Ed Bennett, and recently described in The Guardian as an ensemble performing ‘Unclassifiable, raw-nerve music of huge energy and imagination’, The 10 piece ensemble Decibel explores experimental, extreme and unusual work which generally exists between, or outside the usual categories. They play new music which combines a direct amplified instrumental ensemble sound with electronics, improvisation and theatrical elements. Apart from premiering many works by Ed Bennett, Decibel has worked with a diverse range of subversive composers and artists including Louis Andriessen, Heiner Goebbels, Laurence Crane, Howard Skempton, Michael Finnissy, Joe Cutler and Michael Wolters commissioning and premiering many new works. The group has also collaborated with artists from different disciplines including video artists and choreographers.