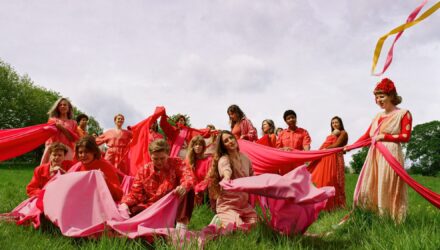 All-female singing collective Deep Throat Choir perform songs from their multi-layered second album ‘In Order to Know You’ for Voices Unwrapped at Kings Place. With support from harpist-beatmaker-producer, Marysia Osu.

“I’m reeling, I’m restless,” sing Deep Throat Choir from the heart of their second album. That restlessness manifests in a set of tremendously abundant, original songs from the east London female and non-binary vocal collective, founded by Landshapes member Luisa Gerstein. Released via Bella Union in December, In Order to Know You is a multi-layered assertion of freshly expansive range, driven by two core virtues: a sense of strength in unity and an open embrace of its singers’ personal experiences, shared through collective, supportive vocal expression.

After 2017’s largely covers-based debut album, Be OK, the choir recognised the call to evolve. “Having been singing together for five-plus years, and having released an album of mostly covers, it felt like the logical next step to make our own music together,” says Gerstein. “This album is the alchemy of all the specific voices and players that make up the choir, and a collaborative process of writing and sharing music and ideas. Sonically, I wanted to move beyond just voices and percussion, to see what richness could be brought with instruments and electronics, and to transition from a choir that does covers to a band with loads of vocalists.”