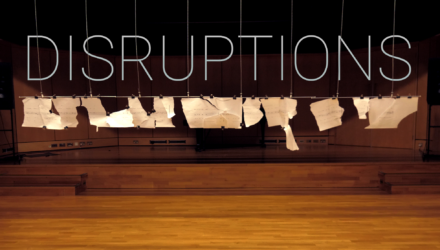 Disruptions: Man in Regent Street is a new work for soprano, paper and electronics created by Jonathan Higgins and Mimi Doulton. It explores how the destruction of a score can be used positively during a performance to generate and transform musical material, inspired by discussions around the environment and reuse. The text is a commentary on climate change and the paradox between eco-consumerism, economic growth and protecting the planet.

This evening’s performance is interspersed with other forms of musical disruption: from the fragmentary Récitations of Georges Aperghis, which blur in and out of comprehensibility; to Jonathan’s ‘Glitch Turntablism’ – an exploration of the noise that can be generated from hacking CD players.

Disruptions: Man in Regent Street was developed on a 2020 Wild Plum Arts Made at the Red House residency. They gratefully acknowledge support from PRS Foundation and the Marchus Trust.

Mimi Doulton:
British-Pakistani soprano Mimi Doulton is fast developing a reputation as an acclaimed interpreter of contemporary opera and song. She recently won 2nd prize at the John Cage Interpretation Award, Halberstadt; made her professional debut at Wigmore Hall singing Brian Elias and Elisabeth Lutyens; and created a work by Rakhi Singh in the Royal Opera House’s 8-bit. She previously covered the role of Jerusha in Gerald Barry’s The Intelligence Park for Music Theatre Wales and the Royal Opera and created a role in Giorgio Battistelli’s Wake with Birmingham Opera Company.

Mimi graduated from the Guildhall School of Music and Drama with distinction in 2018, having previously read Music and Languages at King’s College London. She is an alumna of Dartington International Summer School, the Akademie der zeitgenössiche Musik Luzern, Academie Aix-en-Provence Festival, and the Fondation Royaumont Academie Voix Nouvelles.
mimidoulton.com

Jonathan Higgins:
Jonathan is a composer and performer based in London. His music focuses on exploring how noise can be utilised as a creative and generative tool, working across a variety of different media, including fixed electroacoustic music, instrumental music, live electronics and sound installations. Jonathan performs regularly across the UK as an improvisor using a custom setup of hand modified CD players. Jonathan’s music has been performed, prized and published both nationally and internationally. Jonathan Higgins is supported by PRS Foundation’s The ‘Open Fund’.
jphiggins.co.uk