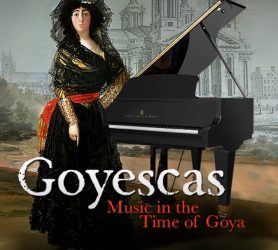 ‘One of the most outstanding Spanish pianists.’ The Daily Telegraph

Granados was fascinated by the artworks of Francisco de Goya – falling in love (in his own words) ‘with the psychology of Goya and his palette…his quarrels, loves and flatteries’. Recognised internationally as a leading exponent of Granados, the pre-eminent Spanish pianist José Menor– cited as ‘the successor to Alicia de Larrocha’ (Diario de Burgos) – will give a complete performance of Granados’ magnum opus, the monumental piano suite Goyescas alongside other sumptuous vignettes also composed under the Goya banner, as part of a commemorative world tour launched at New York’s Carnegie Hall in March.

In collaboration with the Latin Classical Chamber Orchestraand special guests including classical guitarist Laura Snowden, soprano Christin Wismannand the illustrious flamenco dancer and percussionist Nina Corti, this exuberant programme also explores the elegant musical aesthetic of Goya’s era and its intoxicating effect on the Romantic imagination of Granados’ contemporaries and beyond, to the 20th-century works of de Falla Ravel, Obradors and the 21st-century film music of Roque Baños. Expect a colourful programme of fiery, Spanish fandangos,seguidillas and boleros coupled with well-known classical favourites Beethoven, Scarlatti and Haydn, set against the Baroque splendour of St John’s Smith Square.

Originally curated for The National Gallery as part of the 2015 blockbuster exhibition ‘Goya: The Portraits’, this ‘simply fascinating’ programme (Genteventos) is accompanied by a stunning visual projection of Goya artworks and will be introduced by Granados’ great-granddaughter Bárbara Granados.

This event is part of Echoes Festival organised by ILAMS in collaboration with the Instituto Cervantes with the kind support of Acción Cultural Española and the Embassy of SpainImage: Detail from La Duquesa de Alba (1797) by Francisco de Goya y Lucientes (1746-1828)