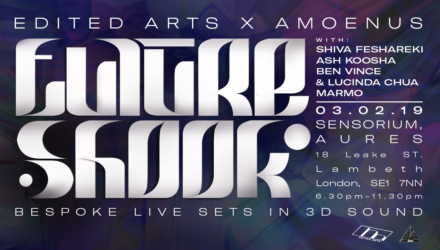 Shiva will slice apart her debut album (out on RESIST, February 15th) in a one-off performance, deconstructing and manipulating her work using cutting-edge turntabling techniques.

​Winner of the 2017 BASCA British Composer Award for Innovation, Shiva is an experimental classical composer, radio presenter and turntablist of British-Iranian heritage. Shiva has performed with her turntables at the BBC Proms, Montreal’s Mutek, Printworks London and Tate Modern. It is a pleasure to welcome her for this intimate show.

Ash makes “mind-bending electronic music” (Pitchfork), which has resonated globally in the last few years. He has performed his audio-visual sets around the world at likes of Form, MoMA PS1, ReWire, TEDX, Boiler Room , Dommune and the ICA in London, to name but a few.

Both established artists in their own right, Ben and Lucinda perform for the second time together. Free flowing melodies and textures govern their duo performance, letting individual sounds move and coalesce in a 3D environment. The interplay of motifs from both sound sources create a rich and evolving tapestry with the vast range of the cello and the live re-pitching/looping Vince’s performance is known for.