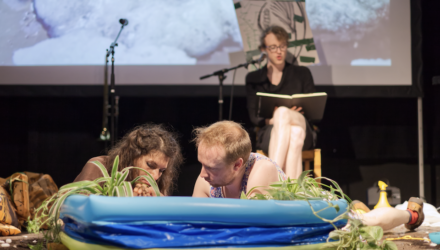 ELISCHA KAMINER CURATES: TO PAINT OVER AND TO MAKE SENSE

A paddling pool, a toaster and an inflatable dinosaur – whimsical props become unexpectedly profound tools to explore themes of play, sexuality, religion and loss in a programme celebrating experimental and radical Queer Jewish new music. Inspired by thoughts and words of Rabbi Delphine Horvilleur on “Jewish responses to crisis”, Associate Composer Elischa Kaminer curates an event featuring the premiere of Sarah Nemtsov’s Kadosh alongside his own work, Resurrection Games Vol. II: to paint over and to make sense.

Resurrection Games Vol. II: to paint over and to make sense was created in 2021 through an intimate collaborative process between violinist Mayah Kadish, trombonist Alex Paxton, pianist Joseph Havlat and composer and theatre maker Elischa Kaminer. Over the course of 75 minutes, the performers investigate the art of ‘living with brokenness’* through improvisation, song and collective play. Explosive energy and radical tenderness collide against a backdrop of plants and bizarre objects, as Kaminer highlights the humour, performativity and electric virtuosity of the three musicians in this highly personalised work.

The title of Sarah Nemtsov’s work Kadosh refers to the Hebrew word for holy, a bible verse (Isaiah 6:3) and the Kedusha, a central part of the daily Jewish Amida prayer. Writing for solo violin and electronics, Nemtsov recalls a melody from the synagogue of her hometown in Germany, layering and distorting fragments of the tune with an array of effects pedals. Kadosh was specially written for violinist Mayah early in 2021 and is dedicated to her and the Jewish Community of the City of Oldenburg.