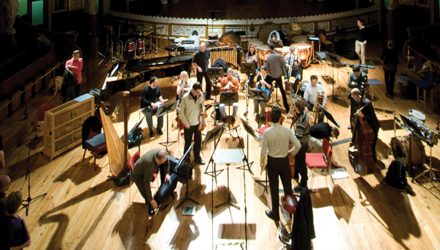 Clark Rundell- conductor
‘Tis the gift to be simple: when Aaron Copland put an old Shaker hymn at the climax of Appalachian Spring, he’d stumbled on something fundamental about being American. Not that “simple” means unsophisticated: Steve Reich, Andrew Norman and Nico Muhly all show that minimal means can lead to thrillingly unexpected ends – and even bridge the Atlantic.

That’s the starting point, vibrant with potential, for a concert that, like everything Ensemble 10/10 does, is all about new musical worlds – which tonight means a premiere from the young Liverpool composer Richard Miller, our second Christopher Brooks Composition Prize winner, in association with the Rushworth Foundation.