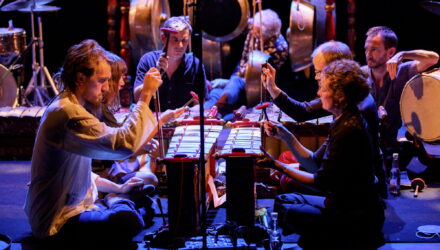 Ensemble Nist-Nah / with Will Guthrie

And as if that wasn’t enough we’ll have a selection of Indonesian Food & Drink including vegan options prepared by Kambuja (Specialists in traditional and modern South East Asian Cuisine).

We will also be hosting a limited number of Javanese Gamelan workshops on Sunday led by two members of Ensemble Nist-Nah who have lived and studied in Indonesia and have a wide knowledge of the culture as well as a prolific background in Western music and teaching.

Ensemble Nist-Nah is a contemporary Gamelan / percussion ensemble led by France-based Australian drummer and percussionist Will Guthrie. Nist-Nah explores Gamelan instrumentation, using the metallaphones, hand drums and gongs of Indonesia alongside drum kit, other percussion and objects, found and junk. Bringing together 9 of France’s finest, Ensemble Nist-Nah hosts a wealth of experience and expertise, with it’s members coming from eclectic and mixed backgrounds, from traditional musicians, contemporary percussionists, to noise and free jazz fanatics.

After more than two decades of Guthrie exploring the extremes of experimental drums and percussion (with the likes of Oren Ambarchi, Roscoe Mitchell, Mark Fell, Jean-Luc Guionnet), the music of Ensemble Nist-Nah aims to combine the rich, bright and lush sounds of Gamelan with his interests in free jazz, electro-acoustic music and diverse experimental music practices, exploring temperament play, extended techniques for percussion, and interlocking polyrhythmic and polymeric non metered pulse.

The music is grounded in Guthrie’s travels in Indonesia and his appreciation of various forms of Gamelan music, from the stately suspended temporality of the courtly Javanese Gamelan Sekatan, to the delirious, thuggish repetition that accompanies the Javanese trance ritual Jathilan, to the shimmering acoustic glitch of contemporary Balinese composer Dewa Alit and his Gamelan Salukat. Far from an exercise in exoticism, Ensemble Nist-Nah includes various members with extensive study history of Indonesian musics, namely Mark Lockett who studied with Sri Hastanto, I Wayan Loceng, I Nyoman Partha Gunawan and Arno Tuikman who studied with Ki Widodo Wilis a dhalang from Wonogiri and his son Whayu Thoyyib Pembayun.