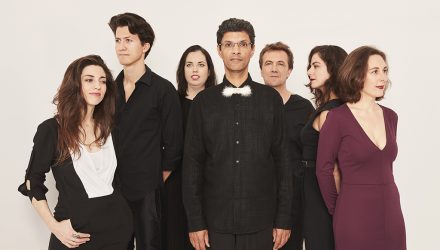 Thierry Pécou’s Outre-mémoire was composed in response to the musical ramifications of colonisation and slavery – a potpourri of dark harmonies, violent rhythms, and colourful, tropical soundworlds; music providing joy and relief from the bitterness of isolation.

In this great work often compared to the Messiaen’s Quatuor du Fin du Temps, Thierry Pécou leads us once again into an overwhelming musical experience that invokes a state of meditative contemplation.

A pause for memory, a ceremony of a quiet contemplation, a suspension of the mind which lends itself to feeling and reflection, such would be the meaning of this piece where the piano part is conceived as a centre of gravity surrounded by satellites, the flute, the clarinet and the cello.

This score (1h 15min) was first performed by Alexandre Tharaud in 2004 in collaboration with installation artist Jean-François Boclé.

Thierry Pécou is one of France’s most prominent composers today, whose numerous accolades include the Grand prix de la musique symphonique and the highly prestigious Diapason d’or.

“The sombre beauty of Outre-mémoire comes as much from allusions to afro-Cuban as from the distanced narration of the composer. Pécou invents his own rite, as powerful by its organic violence as by the melodic bitterness which infuses his work.” Diapason, 2004

“Throughout Outre-mémoire, I wanted the inconceivable to resonate, but in the greatest concentration, without effects or drama, as a silent tocsin.” Thierry Pécou