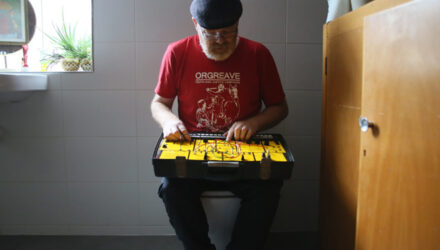 Lead by two of the most influential figures working in electronic music and sound today, this workshop focuses on exploratory relationships between landscape and sound through a series of evolving performative, geometrical, time-based systems and structures. These will include location recording exercises, listening, sound synthesis, the placement of sound within the landscape, durational performances, discussion and analysis, as well as documentation of the workshop and its outcomes. Emphasis will be given to consideration of spatial audio techniques including multi-microphone and multi-speaker methodologies.

Mark Fell is a UK-based multidisciplinary artist. Recognised as being “one of the most compelling and influential electronic artists in the world” (South Bank Centre), his practice draws upon electronic music subcultures, experimental film, contemporary philosophy and radical politics, and typically explores issues such as time-perception, technology, cognition, and collaborative process. Over the past 30 years Fell’s output has grown into a significant body of work: from early electronic sound works and recorded pieces, to installation, critical texts, curatorial projects, educational systems and choreographic performances.

In 2017 Mark curated a major exhibition of sound art for V-A-C foundation (Moscow) “The Geometry of Now”, and led a British council research project to India to study Carnatic music composition and emergent electronic arts (with AC Projects Glasgow). Serralves Foundation (Porto) premiered “Intermetamorphosis” (2017), collection of works by fell which included new commissions as well as a retrospective pieces. In 2018 he completed two large scale multi-spatial sound works: “Protomusic#1” for Sage Gateshead, forming their flagship contribution to the Great Exhibition of the North; and “Frameworks” at Palazzo delle Zattere (Venice). 2019 saw two new performative pieces including “Hominin” (Rewire, Den Haag) and “Against Method” (Pirelli Hanger Bicocca, Milan), as well as the solo exhibition “The Concept of Time is Intrinsically Incoherent” (Focal Point Gallery, South End on Sea). Drawing from sacred geometries to programming structures, these works underlined Mark’s particular interest in non-linear systems and structures, and our complex inter-relationships with them.

Carl Michael von Hausswolff lives and works in Stockholm. Since the end of the 70s, von Hausswolff has worked as a composer using recording technology as his main instrument and as a visual artist using light projections, film/video and still photography as well as other media. His interests spans from social environmental issues and political statements to abstract penetration and supra/sub-reality. He has exhibited at dOCUMENTA (Kassel), the biennials in Venice, Moscow, Liverpool, Istanbul, Sarajevo etc and in Copenhagen, Stockholm, Nicosia, Kaliningrad, Tokyo, London, New York, Philadelphia, etc. His music has been played in festivals such as Sonar (Barcelona), CTM (Berlin), L’audible (Paris), el niche Aural (Mexico City), MUTEK, (Montreal) etc. and released works on record by labels like RasterNoton (Berlin), Touch (London), Laton (Wien), iDeal (Goteborg) and MonoType (Warszaw).

His audio compositions from 1979 to 1992 consist essentially of complex macromal drones with a surface of aesthetic elegance and beauty. In the early 2000’s, Carl Michael boiled away even more ornamental meat from the bones, producing pure, intuitive studies of electricity, frequency functions and tonal autism within the framework of a conceptual stringent cryption. Lately he has also developed a more conceptual form of audio art overlooking subjects such as architecture and urbanism, rats and maggots. He has created a series of social platforms, places where people can meet and consume. His “Thinner- and Low Frequency Bar” was used at the Momentum biennial in Moss, Norway, Prato, Italy and London and his “Glue- (Tobacco-) and High Frequency Lounge” was used in Geneva and in Prato. These works show Hausswolff’s critical view on the society’s hypocritical treatment of drugs and addiction. The audience could sniff the highly toxic substances thinner and contact glue while smoking cigarettes and getting penetrated by the either low or high sine wave tones.