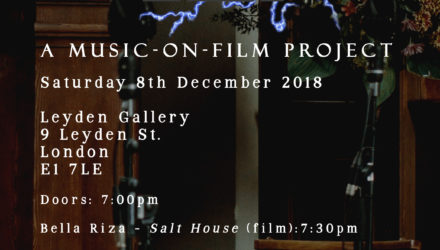 The collaborative Music-on-Film project ePod nano is an original thirty-five-minute work for large ensemble composed by Jocelyn Campbell in 2017. It was commissioned by the Ensemble Eroica’s conductor and artistic director Toby Thatcher.

Initially conceived for the concert hall, ePod mutated during its composition as Jocelyn and Toby began discussing their ambitions to produce works of contemporary classical music outside of a concert hall environment using alternative media. Directed by Bella Riza and recorded, engineered and mixed by Jimi Maffei and Max Anstruther, ePod transitioned into a collaborative work of music-on-film fusing the music with a distinct art-cinematic aesthetic.

Also as part of this event will be a screening of Bella Riza’s Salt House (2017), and a live performance of Jocelyn Campbell’s total:THEFT (2016) for violin and cello, performed by members of Ensemble x.y